» Blog » Do This When Procrastination Strikes 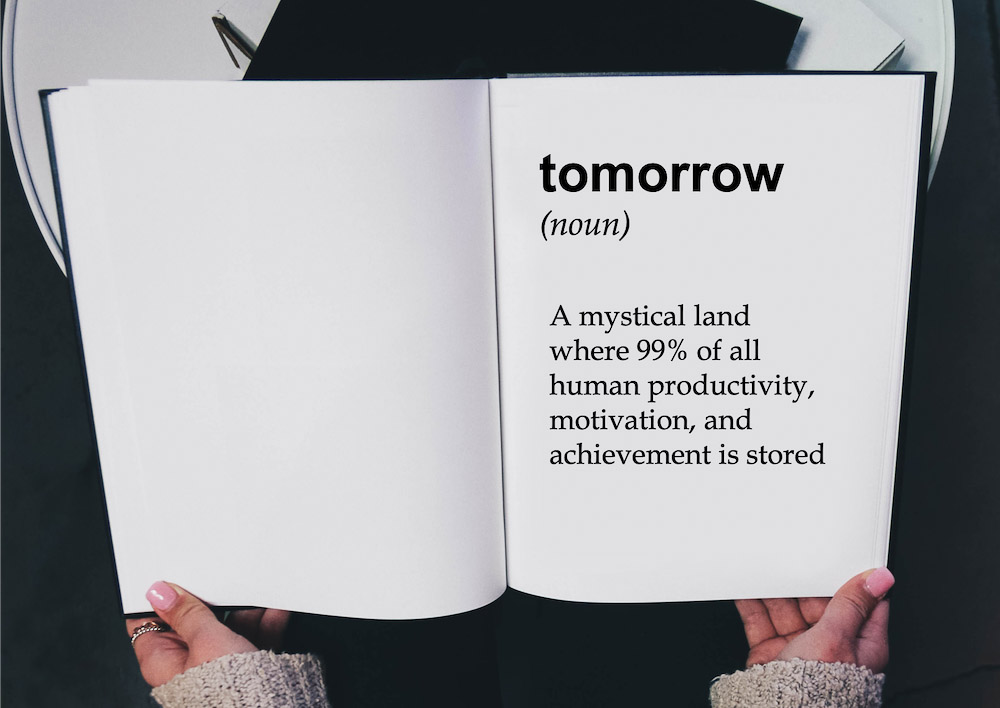 Let’s face it… you might really enjoy your job as an Executive Assistant, but there will still be tasks every now and then that you simply Don’t. Want. To Do.

When procrastination strikes, where do you find the inspiration to shift out of “I’ll do it later” mode and into action?

Today I’m going to share my theory on why people procrastinate and also a trick I use to stop procrastination in its tracks.

I’ll be honest, I’m a life-long procrastinator. When it comes to things I don’t want to do, historically it’s taken every ounce of my willpower to start early enough to leave space for things to take longer than expected, or to not be stressed out at the 11th hour.

For example, in college I would have a paper due for a Shakespeare class – and find myself only starting to read the entire play at 7 pm the night before. The paper would commence somewhere around 2 am. I’d be sprinting to drop it off in time at 9 am before the last chime of the bell.

As an EA, one person I supported was one of those lucky freaks of nature who’s genetically programmed to start things early. Although he knew I could get an enormous amount of shit done, he had my number early on as a procrastinator at heart. When it came to certain challenging activities like building a presentation for him, he wanted the work far sooner than I’d do left to my own devices. My performance reviews always included a note to “Start things sooner and leave more time for things to go wrong” for my first few years on the job.

Not only did I have a tendency to procrastinate on boring or hard things at work, but I also procrastinated on things that were hard outside the office. When I finished my yoga teacher training and needed to start pounding the pavement to teach classes, resistance hit like a ton of bricks. I put off calling studios for several weeks before I finally stopped spending time designing classes in the comfortable sanctuary of my notebook and began asking people to hire me.

Maybe you can relate if you’re an EA in the job partly because it offers stability while still giving you time to pursue a dream on the side. If you’re trying to gain traction as a writer, healer, artist, or start a side business, you know there are going to be things you need to do to move yourself forward. But why is it so hard to actually make progress?

Everyone knows that procrastination is not a great recipe for supercharging your life or your career. So why the heck is it so hard to make yourself stop?

Why Do You Procrastinate?

Over a lifetime of observing my own tendency to procrastinate as well as others, I’ve come to believe there are 2 main reasons why people put things off until later.

You know the feeling of being pulled magnetically towards the activity you enjoy – or one that’s a quick & easy win? That’s the opposite of procrastination – and frequently the stuff we’re doing when we’re in the act of procrastinating!

You might get a sense of satisfaction from getting a tedious task done (expense reports, anyone?) but the amount of activation energy required to start and see it through until the end can be enormous.

When the balance of energy required to start and do the task is greater than the amount of energy it gives back to you – in the form of satisfaction, relief, enjoyment, absorption, creative fulfillment – you are more likely to avoid this activity.

Your brain is wired for survival. Survival depends on conserving energy. So if you feel like you’re biologically designed to procrastinate – well, in some ways, you actually are!

Some things take a lot of energy up front, but you know they’ll be highly rewarding – like a tough workout or learning a new language. Those things are less likely to activate your inner procrastinator because even though they aren’t easy in the moment, you’re relatively confident that the effort will be worth it.

Activities in this first category of procrastinated tasks are usually things you know you can do, but you just don’t feel like it. Which brings us to reason Number 2…

Enter the realm of things you’re not so sure you can do. Put another way: when something scares you, it’s a lot harder to make yourself do it. Even if you really want to!

The intention to push out of your comfort zone – and attempt something you’re not even sure you can be successful at – is often fertile ground for your inner procrastinator.

Your well-intended brain, once again protecting your survival, steers you away from that which you might fail at and back to the safety of “I got this”. Which means that even though you love writing and really wanted to crank out that book chapter this weekend, you may still find that you cleared out 800 junk emails and re-organized your sock drawer, but have no book chapter to show.

Fear can be sneaky. You might even feel relatively confident that you can Do The Thing – at the surface, the task might not seem scary at all. But if there’s a fear lurking underneath, your procrastinator will find it and snap to attention.

For example, I recently delayed handing in a written presentation for my German class for 3 weeks. After it was already 100% done! At first glance, I wasn’t nervous about the assignment itself, even though I knew there were lots of mistakes – so why was my procrastinator triggered?

Inquiry unearthed some stealthy “what will someone think about me” fear. I wrote about what I wanted, in the way I wanted. But it was a different approach than my classmates’. My brain perceived a risk to the approval of my teacher.

It’s useful to know WHY you’re procrastinating because understanding what fears are holding you back and what activities tend to drain you are key parts of finding your way toward the career and the life of your dreams.

Okay, But How Do You Actually Stop Procrastinating?

The simplest and easiest way I’ve found to stop procrastinating and shift into action is to consider my freedom.

Ask yourself: by doing now the thing I’m putting off for later, what’s the freedom I’ll gain?

Here are some things I didn’t procrastinate on this week, because of the freedoms I identified:

It doesn’t work for me to tell myself that I really SHOULD start the dirty deed. What DOES work is to dangle a carrot in front of myself for what I’d love to feel instead.

It takes me right out of feeling shackled to an unpleasant task I don’t want to do, into feeling inspired to grab the reins and steer myself towards liberation.

So when you’re feeling the urge to put something off – and you know you’d be well served by starting today – ask yourself:

How will starting now set me free?

Write down your answer. Then, take a minute to actually FEEL what it’d be like to be released from the confines of the task undone.

Now, go get after it, already!

How do you beat procrastination? I’d love to hear! And if you find this trick helpful, please share it with other executive assistants!

Are you restless in your
Executive Assistant role?